Termites
Termites are classified at the taxonomic rank of order Isoptera. Like ants, some bees, and wasps which are placed in a separate order Hymenoptera, termites are social insects that practise division of labour among castes, produce overlapping generations and take care of young collectively.

A typical colony contains nymphs (semi-mature young), workers, soldiers, and reproductive individuals of both genders, sometimes containing several egg-laying queens. About 10 percent of the estimated 4,000 species are economically significant as pests that cause serious structural damage to buildings, crops or plantation forests owing to their cellulose-eating habit.

However, termites are major decomposers particularly in the subtropical and tropical regions, that are vital components in completing the nutrient cycle in natural environment. They are generally grouped according to their feeding behaviour, namely subterranean, drywood and dampwood termites. Wood damaged by subterranean termites is often not noticed because the exterior surface usually remains intact with hollow interior. Termites have protozoa in their digestive tracts that can convert cellulose into usable food. Termites remain hidden within wood and are often difficult to detect.

However, subterranean termites infestation may be detected by the presence of winged reproductives, mud tubes, and wood damage. Subterranean termite feeding follows the grain of the wood and only the soft springwood is attacked. Subterranean termites do not push wood particles or pellets (fecal material) to the outside, but rather use it in the construction of their tunnels. This debris, along with sand and soil particles, is used as a form of plaster. Dampwood termites (Termopsidae) contain a mere 4 – 5 extant genera with 13–20 living species, but can be divided into several subfamilies. They may be a nuisance but compared to the drywood termites usually do not cause extensive damage to buildings or other man-made structures.

As their name implies, they like to eat wood that is not dried out, perhaps even rotting, and consequently of little use to humans. 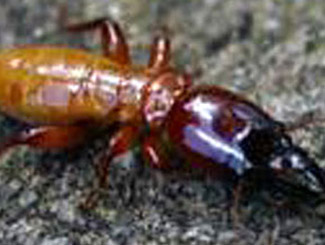 Drywood termites are three growth stages, eggs, immatures and adults. Drywood colonies are rather small (a few thousand individuals), and the colony develops relatively slowly. They neither live in the ground nor maintain contact with the soil, and they do not build mud tubes. 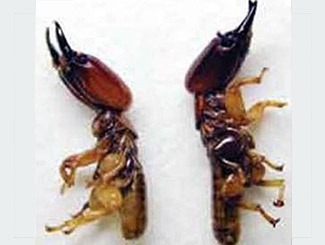