Adults are 4.0 to 5.0 mm long and their bodies are reddish brown.They infest various kinds of dried foods,such as grains, milled cereal, spice, nuts, and dried fruits. Using their strong mandibles, they bore into the packages of food products. Females lay 500 to 1,000 eggs during their lifetime. They develop into adults in about two months and live for more than 200 days.

Adults lesser grain borers are 2.0 to 3.0 mm long and their bodies are red-brown to black-brown. They infest various kinds of dried food, grains, milled cereal, spice,nuts, dried fruits, and dried meats/fish. Females lay 300 to 500 eggs in these foods. The larvae bite into grain kernels and pupate there. They develop into adults in about one month.

Adults are 2.5-3.5 mm long and their bodies are black-brown. They have flattened bodies and six saw-toothed projections on the each side of the thorax. They infest various kinds of dried food; grain, milled cereal, bread, pasta products, chocolate, candy and dried fruits. Adult female lays 100~300 eggs. They develop into adults about 40 days and live 6-10 months.

The khapra beetle is the only one species of stored-product insects, which was listed as the worst 100 exotic species by IUCN (International Union for Conservation of Nature and Natural Resources). 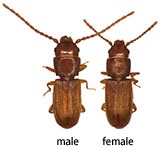 Adults are 1.5 to 2 mm long and reddish-brown. They have highly flattened parallel-sided bodies and long  antennae. The beetles are important pests of cereals, cereal products, oilseeds and dried procecced foods of vegetable origin. In tropical regions  they infest nuts, cocoa, copra and cassava. They can feed on mold on grain germ, because they originally inhabited under the bark of tree and  used it as food in the field.

Adult weevils are 2.5-4 mm long, brown to black. Their head has a characteristic snout. The weevil is a major pest of whole cereal grains, more commonly associated with rice, wheat, barley and corn.

Females lay up to 150 eggs over their lifespan. Eggs are laid singly into grains. A female chews a small hole, into which she lays an egg. The hole is then plugged with a waxy secretion. Larvae develop hidden within a cavity hollowed out within the grain.
What's ''TORIOS®''?

''TORIOS®'' is a reusable and widely applicable pheromone trap for monitoring of crawling stored-product insects.


''TORIOS®'' employs stickers instead of oil as the capturing tool, so handling is easy. Moreover, ''TORIOS®'' is made from degradable plastics in order to decrease environmental load.

Because the lure contains no harmlful materials or insecticides, it is safe for both humans and animals.

Place the traps on the floor along the walls in the working area, warehouse or storage area. Place traps 5 to 10 m apart, but away from manufacturing lines so as to avoid attracting adults that may contaminate products.

Stickers and pheromone lures can be stored for one year after being manufactured. The useful life is one month after the trap is set up. Keep the trap kits in a dark place at a temperature of 10 to 40°C. Storing the lures in a refrigerator or a freezer will cause them to deteriorate.